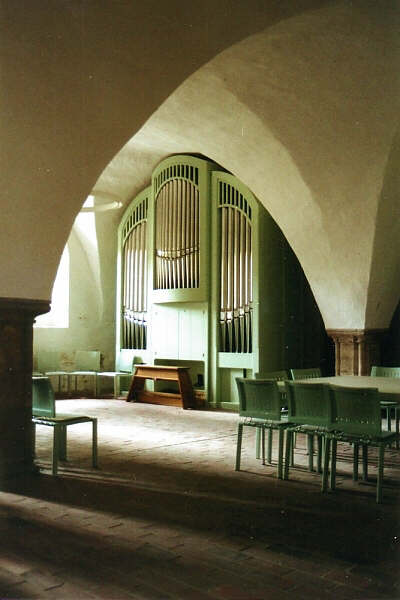 The disposition allows the organist to interpret organ music of different epochs. For the authentic reproduction of old organ music, the new organ is equipped with two different wind systems. By means of a somewhat hidden switch the organist has the possibility to switch the wind supply system of the organ to moving wind. During this process, a 40 kg weight is lifted from the main bellows and the windchest bellows are fixed under the manual windchest, so that unrest in the wind, which occurs during playing, is deliberately no longer compensated. Another additional equipment are the electric sub-octave couplers and the super-octave coupler. After the experience with this technique on the large cathedral organ, this technique has now also found its way to the new organ for the Winterkirche. A particularly large effect can be achieved with the superoctave coupling II/II and the suboctave coupling II/II. With the help of these couplers you can multiply the sound volume of the swell.

In order to enable the organist to tune the reed stops easily and independently, the new windchests were equipped with so-called reed pushers. With the help of these small buttons, which are mounted on the wind chest directly in front of the rows of reeds, the organist himself can eliminate detuning in the reed registers at any time without having to use an additional key holder. This facility is also important for the instruction of C-seminarists in the field of independent reed tuning. 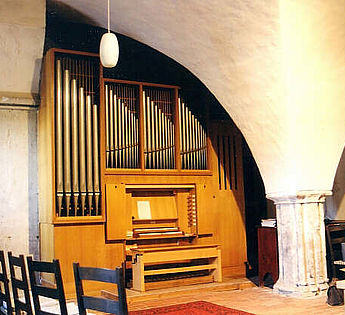 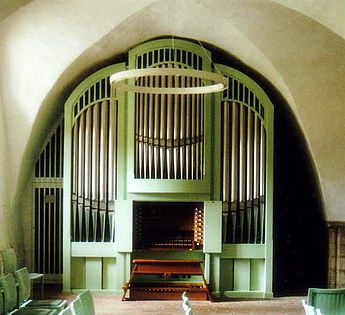 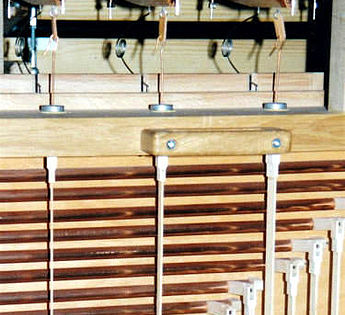 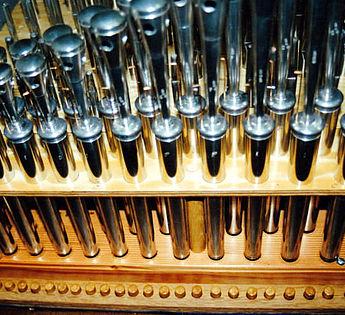 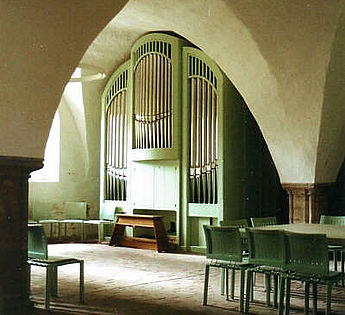 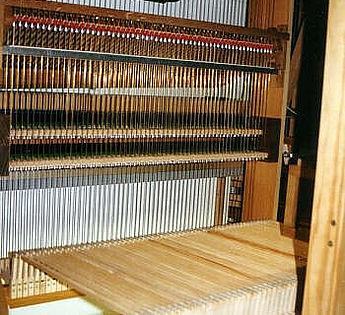 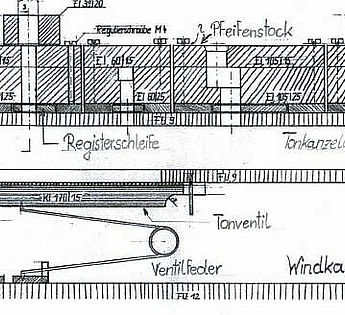 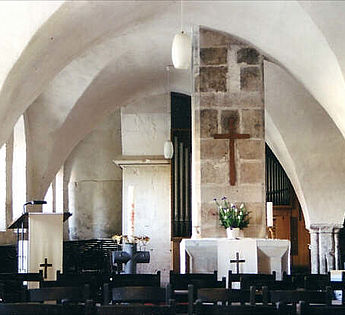 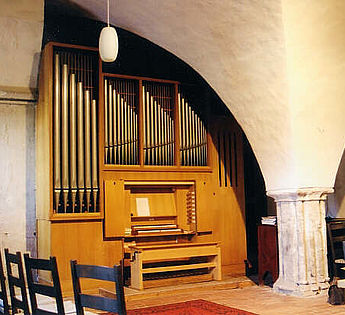 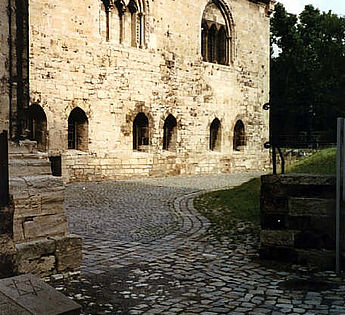 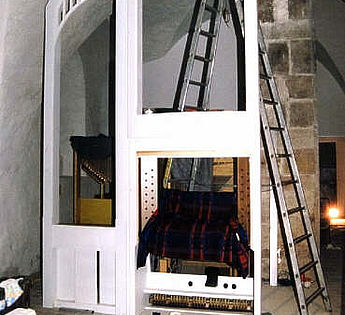 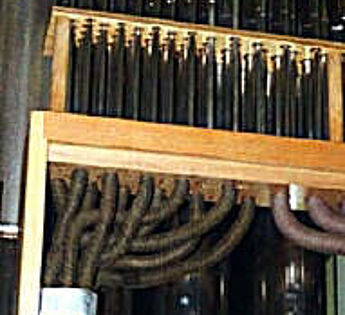 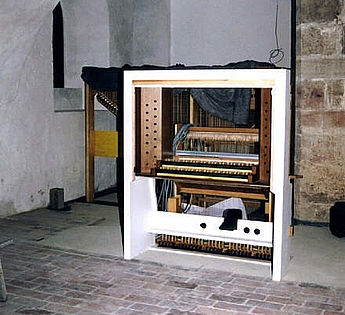 The Winter Church and its organ until May 2001

Today's Winter Church was built during the first construction phase of the cathedral. This room is the so-called upper cathedral cellar, which once served the cathedral chapter as a dining and recreation room. Until its destruction in the Second World War, the cathedral was also used for church services in the cold season, as it could be heated by a large coal heater.
During the reconstruction work on the cathedral, the community decided not to install a heating system. They were looking for a smaller room suitable for the services during the winter months. For this purpose the two-aisled upper cathedral cellar was rebuilt and renovated in 1952. The inauguration took place at Christmas of the same year.
In 1953 the Kirchenmusikalische Seminar was founded in Halberstadt am Dom. Young people who enjoy church music were able to complete their training as C-church musicians here within a year. To learn to play the organ, the seminarians had the organs of St. John, St. Moritz and St. Martin's Church at their disposal, as well as the organ in the cathedral. However, these churches were not heatable.
In 1971 Mr. Wilhelm Sohnle, master organ builder from Halberstadt, was commissioned to build a new practice instrument for the Winterkirche and thus also for the Kirchenmusikalisches Seminar (KMS). A Knauf organ from 1860 in the village of Winnigen near Aschersleben served as the basis for this. Behind a new facade (designed by architect F. Lewecke), Mr. Sohnle built a new organ using the old windchests, the manual keyboards, parts of the sound and stop action, the magazine bellows and individual stops. On the back wall of the subbass pipes C - Cs, for example, the name Knaufs can be found.
Despite Mr. OBM Sohnle's concerns about the acoustically very unfavorable location, the instrument was hidden on the north side of the Winterkirche. The new organ was inaugurated for the 1972 harvest festival.
In the last years the organ showed more and more mistakes. Certainly the excessive use of the instrument by the seminarists and the old material used were the main causes for the disturbances. The cathedral parish was faced with the decision to have the instrument repaired or to plan a new organ. 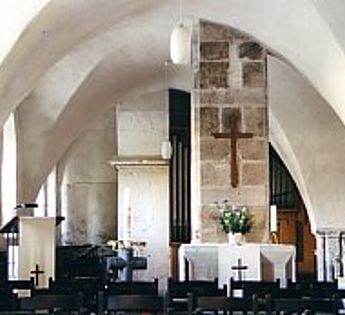 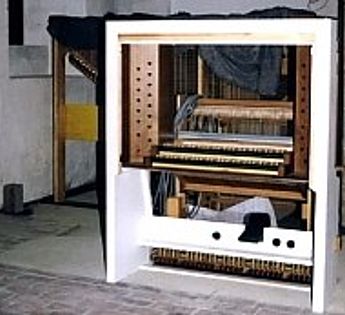 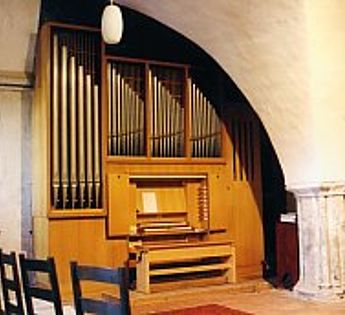 A new organ for the renovated Winterkirche

The decision was made for a new instrument. The organ expert Mr. Christoph Schulz, together with the cathedral cantor Mr. Claus-Erhard Heinrich and Prof. Dr. Reinhardt Menger, designed a disposition with 22 stops on two manuals and pedal. Since the new organ is supposed to be versatile, it was given a disposition that does justice to both baroque and romantic organ literature and performance practice.

The acoustic conditions in the Winterkirche have always been difficult for the entire church music work. The organ on the northern side of the room was hidden behind a pillar that served as the back wall of the altar. Also the trombone choir or other musicians found only place behind the altar. As a result, there was no direct contact with the parish or the priest. The search for a suitable location for the organ and the need for a versatile parish room was the starting point for a general redesign of the Winterkirche. The result was the conversion of the altar and the sermon stand to the east side of the Winterkirche, the installation of underfloor heating, which allows an even temperature control of the church room, and the purchase of a new chair, which was arranged around the altar from three sides. As a result, both direct eye and speech contact with the pastor is now possible for many more worshippers. The organ was placed in place of the altar. It forms the end of the church room. (Behind it there is the new community kitchen as well as the sanitary facilities. 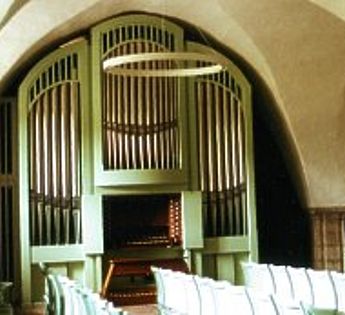 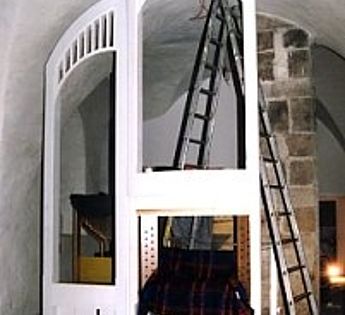 Insights into the organ

The heart of every organ is the windchest. On it are the pipes of the individual stops. The wind chest is divided from the inside into narrow chambers, which are separated from each other by wooden differences. Each key on the keyboard has a control room. On these channels - seen from above - are the pipes of the different registers of a work, which, however, are assigned to the same tone (key). The necessary wind is directed from the wind box to the whistle of a sound via the channels. Whether the sound really sounds depends on whether the register loop (which runs across the windbox) closes or releases the corresponding connecting hole. On the photo you can still see the windchests without these register loops. Later, one of the 1588-sounding pipes of the organ will be placed on one hole of each pipe stick.

Through the case you can also get a small insight into the interior of the organ. The wooden pipes, which can be seen in the middle through the brochure, belong to the Bordun 16'. Of the 1588 pipes, 126 are made of wood. Wooden stops completely taken from the previous organ are Subbass 16', Octave Bass 8' and Gedackt 8'. The intonation of these registers was adapted to the new sound conditions. Two octaves of the Gedackt 4' from the old organ were also used in the new organ.

The string choir is composed of the delicate and quiet voices of the organ. Compared to the pipes of the principal choir, the pipes in this sound group are much slimmer, i.e. their diameter (scale length) is considerably smaller. In the main work the 8' viol belongs to this register group, in the swell the Salicional 8' and the Vox celestis 8'. The Vox celestis 8' is a so-called beat register. This register of the organ is deliberately "slightly out of tune". If you play the Salicional together with the Vox celestis, a gentle beat is audible. The romantic effect of the latter two registers is enhanced by the fact that they stand in the swell and can therefore be played louder and quieter.

In the new organ this sound family includes the Bordun 16', the Koppelflöte 8' and the Gedackt 4' in the main work as well as the Gedackt 8', the Traversflöte 4', the Nasard 2 2/3' and the Waldflöte 2' in the swell. The pipes of the flute choir have a much wider scale than the pipes in the principal choir and therefore sound round, warm and full.

The crowning glory of every organ is the reed choir. In the new organ four stops belong to this group: the trumpet 8' in the main work, the oboe 8' in the swell work and the trombone 16' and field trumpet 4' in the pedal. A special feature of the new organ is the 5-gang cornet, which can be seen through the upper part of the veil boards. This register, which originated in French organ building, already had its permanent place in the organs of France and Italy in the 16th century. Although its construction does not really belong to the reeds, it is nevertheless assigned to the reed choir, since it serves to imitate the trumpet voice. The special thing about this register is that it actually consists of the following five different independent rows of pipes: That is, if you press only one note, five pipes will sound. Since the cornet consists of relatively small pipes, the register is set up in high benches for better sound radiation. 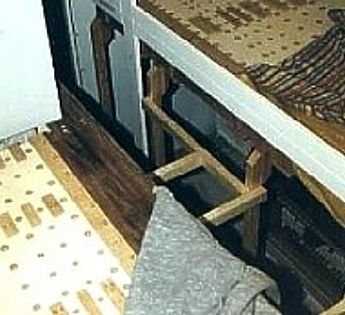 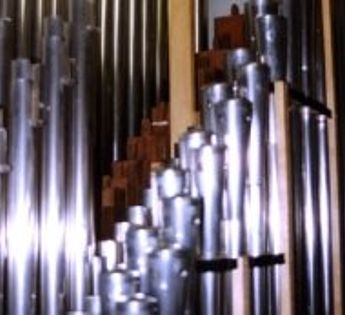